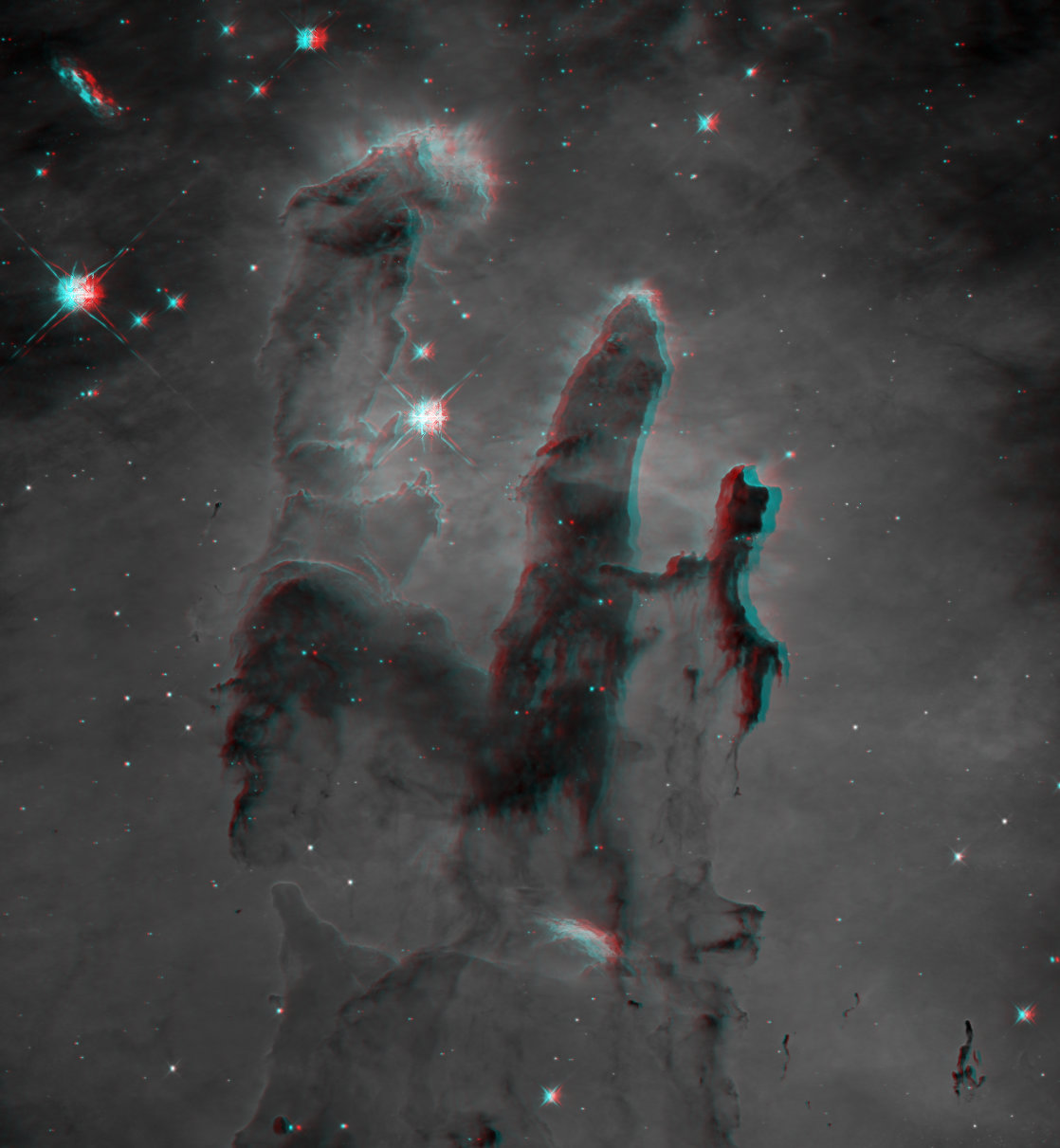 The 3D Stereo module can output images in various formats, for example in this red/cyan anaglyph format.

The depth cues introduced are merely educated guesses by the software and user, and should not be confused with scientific accuracy. Nevertheless, these cues can serve as a helpful tool for drawing attention to processes or features in an image.

Depth cues can also be highly instrumental in lending a fresh perspective to astronomical features in an image. The Stereo 3D module is able to generate plausible depth information for most deep space objects, with the exception of some galaxies. 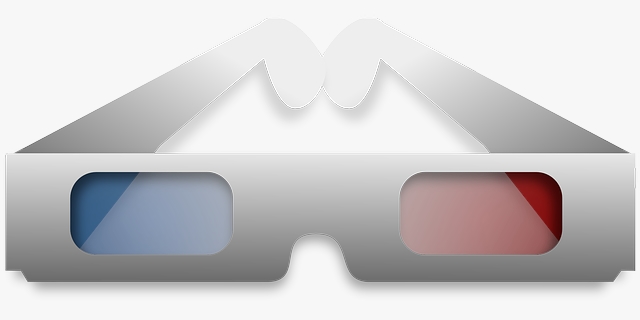 A pair of Red/Cyan glasses is a cheap but effective way of evaluating the output of the Stereo 3D module.

Perceiving depth when using the module

Using the Stereo 3D module effectively starts with choosing a depth perception method that is most comfortable or convenient.

By default, the Side-by-side Right/Left (Cross) Mode is used, which allows for seeing 3D using the cross-viewing technique. If you are more comfortable with the parallel-viewing technique, you may select Side-by-side Left/Right (Parallel). The benefits of the two aforementioned techniques is that they do not require any visual aids, while keeping coloring intact. The downside of these methods, is that the entire image must fit on half of the screen. E.g. zooming in breaks the 3D effect.

If you have a pair of red/cyan filter glasses, you may wish to use one of the three anaglyph Modes. The two monochromatic anaglyph modes render anaglyphs for printing and viewing on a screen. The screen-specific anaglyph will exhibit reduced cross-talk (aka "ghosting") in most cases. An "optimized" Color mode is also available, which retains some coloring. Visual spectrum astrophotography tends to contain few colors that are retained in this way, however narrowband composites can benefit. Finally, a Depth Map mode is available to inspect (or save) the z-axis depth information that was generated by the current model.

The depth information generated by the Stereo 3D module is entirely synthetic and should not be ascribed any scientific accuracy. However, the modelling performed by the module is based on a number of assumptions that tend to hold true for many Deep Space Objects and can hence be used for making educated guesses about objects. Fundamentally, these assumptions are;

Depth information is created between two planes; the near plane (closest to the viewer) and the far plane (furthest away from the viewer). The distance between the two planes is governed by the 'Depth' parameter.

The 'Luma to Volume' parameter controls whether large bright or dark structures should be given volume. Objects that primarily stand out against a bright background (for example, the iconic Hubble 'Pillars of Creation' image) benefit from a shadow dominant setting. Conversely, objects that stand out against a dark background (for example M20) benefit from a highlight dominant setting.

The 'Simple L to Depth' parameter naively maps a measure of brightness directly to depth information. This a somewhat crude tool and using the 'Luma to Volume' parameter is often sufficient.

The 'Highlight Embedding' parameter controls how much bright highlights should be embedded within larger structures and context. Bright objects such as energetic stars are often the cause of the visible emissions around them. Given they radiate in all directions, embedding them within these emission areas is the most logical course of action.

The 'Min. Structure Size' parameter controls the smallest detail size the module may use to construct a model. Smaller values generate models suitable for widefields with small scale detail. Larger values may yield more plausible results for narrowfields with many larger scale structures. Please note that larger values may cause the model to take longer to compute. 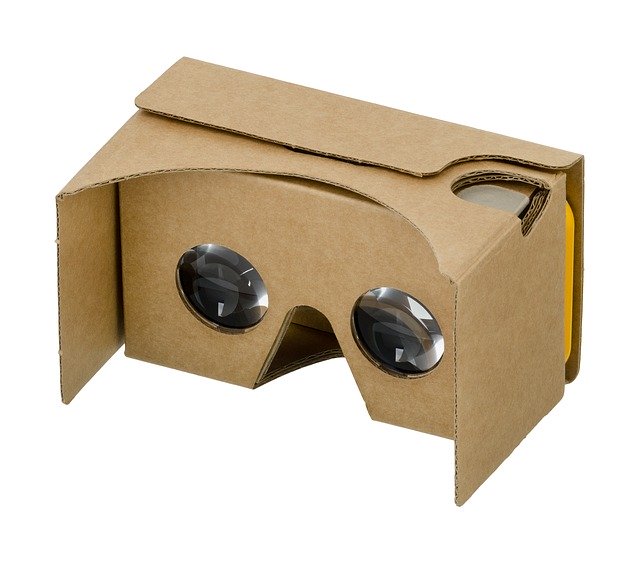 The standalone VR experiences are compatible with anything from the latest headsets to the sub-$5 Google Cardboard devices.

The 'WebVR' button in the module exports your image as a standalone HTML file. This file can be viewed locally in your webbrowser, or it can be hosted online.

It renders your image as an immersive VR experience, with a large screen wrapping around the viewer. The VR experience can be viewed in most popular headsets, including HTC Vive, Oculus, Windows Mixed Reality, GearVR, Google Day Dream and even sub-$5 Google Cardboard devices.

To view an experience, put it in an accessible location (locally or online) and launch it from a WebVR/XR capable browser.

Please note that landscape images tend to be more immersive.

The 'Web2.5D' button in the module exports your image as a standalone HTML file. This file can be viewed locally in your webbrowser, or it can be hosted online.

Depth is conveyed by a subtle, configurable, bobbing motion. This motion subtly changes the viewing angle to reveal more or less of the object, depending on the angle. The motion is configurable both by you and the viewer in both X and Y axes. The motion can also be configured to be mapped to mouse movements.

A so called 'depth pulse' can be sent into the image, which travels through the image from the near plane to the far plane, highlighting pixels of equal depth as it travels. The 'depth pulse' is useful to re-calibrate the viewer's persepective if background and foreground appear swapped.

Hosting the file online, allows for embedding the image as an IFRAME. The following is an example of the HTML required to insert an image in any website;

The following parameters can be set via the url; 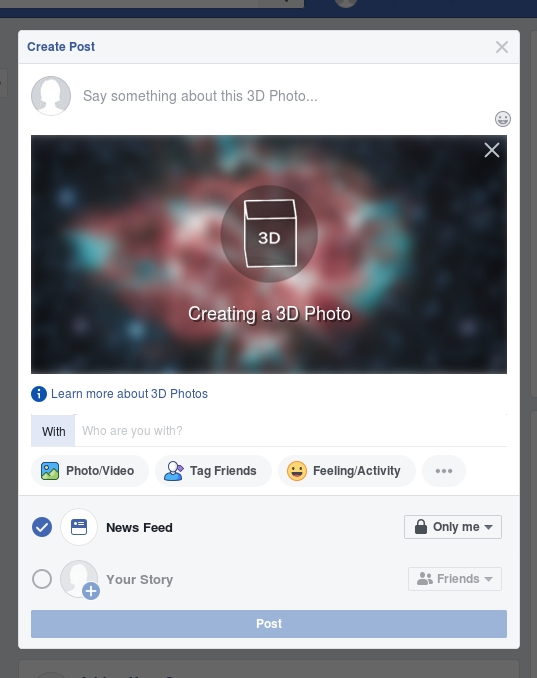 The Stereo 3D module is able to export your images for use with Facebook's 3D photo feature.

Please note that due Facebook's algorithm being designed for terrestrial photography, the 3D reconstruction may be a bit odd in places with artifacts appearing and stars detaching from their halos. Nevertheless the result can look quite pleasing when simply browsing past the image in a Facebook feed.

TVs and projectors that are 3D-ready can - at minimum - usually be configured to render side-by-side images as 3D. Please consult your TV or projector's manual or in-built menu to access the correct settings.