In conjunction with the Composite module, the Entropy module can be used to boost detail in, for example, Synthetic L+SHO datasets, while availing of signal evolution Tracking. Here O-III was boosted, while Tracking kept noise propagation under control.

The Compose module is easy-to-use, but extremely flexible compositing and channel extraction tool. As opposed to all other software, the Compose module allows you to effortless process, LRGB, LLRGB, or narrowband composites like SHO, LSHO, Duo/Tri/Quadband, HaLRGB etc. composites, as if they were simple RGB datasets.

In traditional image processing software, composites with separate luminance, chrominance and/or narrowband filters, require lengthy processing workflows; luminance (detail), chrominance (color) and narrowband accents datastreams need (or should!) be processed separately and only combined at the end to produce the final image.

Through the Compose module, StarTools is able to process luminance, color and narrowband accent information separately, yet simultaneously.

This has important ramifications for your workflow and signal fidelity;

Finally, the Compose module can be used to create bi-color composites, or to extract individual channels from color images.

Care must be taken that all datasets are of the exact same dimensions and are perfectly aligned. Alignment should always be done during stacking (by means of a common reference stack) and never after the fact when the datasets have already been stacked. Alignment during stacking will yield the least amount of errors in point spread functions and chrominance (color) signal, which is important for operations such as deconvolution and color calibration.

The "Luminance" button loads a dataset into the "Luminance File" slot. The "Lum Total Exposure" slider determines the total exposure length in hours, minutes and seconds. This value is used to create the correct weighted synthetic luminance dataset, in case the "Luminance, Color" composite mode is set to create a synthetic luminance form the loaded channels. Loading a Luminance file will only have an effect when the "Luminance, Color" parameter is set to a compositing scheme that incorporates a luminance dataset (e.g. "L, RGB", "L + Synthetic L From RGB, RGB" or "L + Synthetic L From RGB, Mono") .

There are a number of compositing schemes available, most of which will put StarTools into "composite" mode (as signified by a lit up "Compose" label on the Compose button on the home screen). Compositing schemes that require separate processing of luminance and colour will put StarTools in this special mode. Some module may exhibit subtly different behaviour, or expose different functionality while in this mode.

The following compositing schemes are selectable;

For practical purpose, synthetic luminance generation assumes that, besides possibly varying total exposure lengths, all other factors remain equal. E.g. it is assumed that bandwidth response is exactly equal to that of the other filters in terms of width and transmission, and that only shot noise from the object varies (either due to differences in signal in the different filter band from the imaged object, or due to differing exposure times).

When added to a real (non synthetic) luminance source (e.g. the optional source imported as 'Luminance File'), the synthetic luminance's three red, green and blue channels are assumed to contribute exactly one third to the added synthetic luminance. E.g. it is assumed that the aggregate filter response of the individual three red, green and blue channels, exactly match that of the single 'Luminance File' source. In other words, it is assumed that;

If the above is not (quite) the case and your know exact filter permeability, you can prorate the filter response by varying the Total Exposure sliders.

Finally, in the case of the presence of an instrument with a Bayer matrix, the green channel is assumed to contribute precisely 2x more signal than the red and blue channels.

Unique to StarTools, channel assignment does not dictate final coloring. In other words, loading, for example, a SHO dataset as RGB, does not lock you into using precisely that channel mapping. Thanks to the signal evolution Tracking engine, the Color module allows you to completely remap the channels at will for the purpose of colouring, even far into your processing.

As is common practice in astronomy, StarTools assumes channels are imported in order of descending wavelength. E.g. the dataset with the longest wavelength (e.g. the light with the highest nm or Å comes first). In other words, the reddest light comes first, and the bluest light comes last.

In practice this means that;

In any case, you should not concern yourself with the colouring until you hit the Color module in your workflow; as opposed to other software, this initial channel assignment has no bearing at all on the final colouring in your image. Please note that failing to import channels correctly in the manner and order described above, will cause the Color module to mis-label the many colouring and blend options it offers.

With the introduction of the NBAccent module in StarTools 1.8, a third parallel datastream type has been introduced; that of narrowband accents for visual spectrum augmentation. Adding narrowband accents to visual spectrum datasets has traditionally been a daunting, difficult and laborious process, involving multiple workflows. The NBAccent module is a powerful module that starts its work as soon as your load your data in the Compose module. Crucially it adds only a single, easy step to an otherwise standard workflow, while yielding superior results in terms of color fidelity/preservation.

Be sure to specify the correct type before continuing. 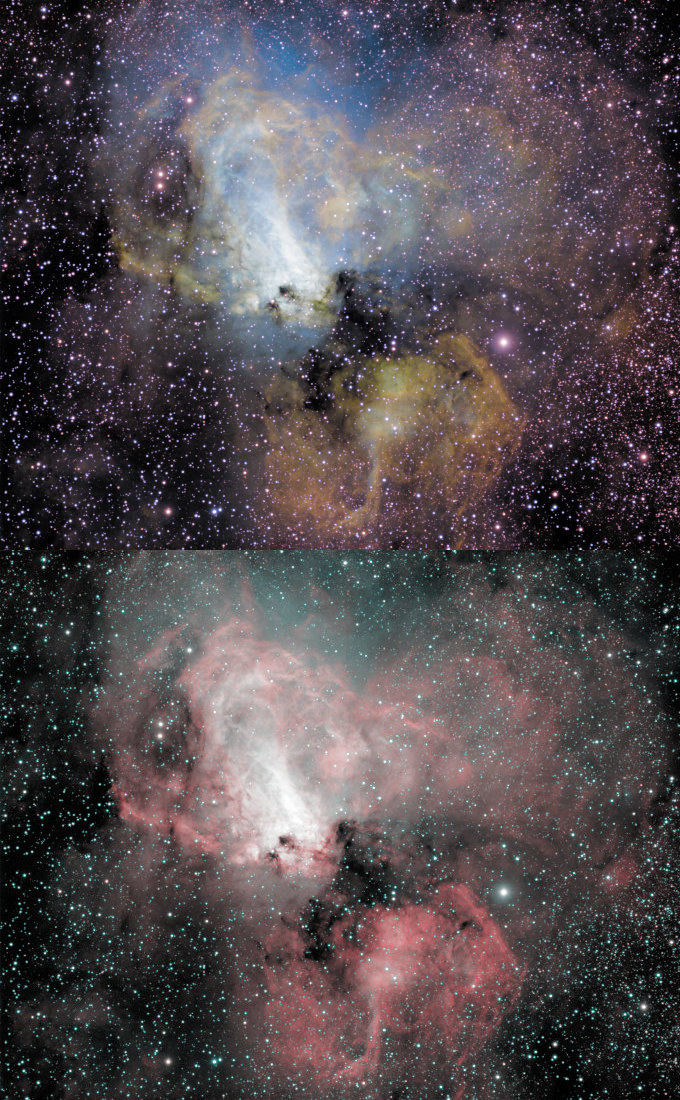 The Hubble Space Telescope palette (also known as 'HST' or 'SHO' palette) is a popular palette for color renditions of the S-II, Hydrogen-alpha and O-III emission bands. This palette is achieved by loading S-II, Hydrogen-alpha and O-III ("SHO") as red, green and blue respectively. A special "Hubble" preset in the Color module provides a shortcut to color rendition settings that mimic the results from the more limited image processing tools from the 1990s.

A popular bi-color rendition of H-alpha and O-III is to import H-alpha as red and O-III as green as well as blue. A synthetic luminance frame is then created that only gives red and blue (or green instead of blue, but not both!) a weighting according to the two datasets' exposure lengths. The resulting color rendition tends to be close to these bands' manifestation in the visual spectrum with H-alpha a deep red and O-III appearing as a teal green.

StarTools / Compose is also available as