The Unified De-Noise module is the ultimate application of the signal evolution Tracking feature (which data mines every decision and noise evolution per-pixel during the user's processing). The results that Unified De-Noise is able to deliver autonomously because of this deep knowledge of your signal and its evolution, are absolutely unparalleled; like many algorithms in StarTools, the algorithm works on a temporal (3D) basis, rather than just spatial, giving it vastly more data to work with.

Whereas generic noise reduction routines and plug-ins for terrestrial photography are often optimised to detect and enhance geometric patterns and structures in the face of random noise, the Unified De-Noise module is created to do the opposite. That is, it is careful not to enhance structures or patterns, and instead attenuates the noise and gives the user control over its appearance. Its unified noise reduction routines are specifically designed to be "permissible" even for scientific purposes - that is, it was designed to only carefully remove energy from the image and not add it; it strictly does not sharpen, edge-enhance or add new "detail" to the image.

In addition, StarTools is currently the only software that can be made to also specifically target walking noise (streaks) caused by not being able to dither during acquisition (for example when conducting Electronically-Assisted Astronomy).

Denoising starts when switching Tracking off. It is therefore the last step in your workflow, and for good reason; being the last step, Tracking has had the longest possible time to track and analyse noise propagation.

StarTools is the only software solution for astrophotography that can target walking noise.

The first stage of noise reduction involves helping StarTools establish a baseline for visual noise grain and the presence (and direction) of walking noise. To establish this baseline, increase the 'Grain size' parameter until no noise grain of any size can be seen any longer. StarTools will use this baseline as a guide as to what range of details in your image is affected by visible noise.

After clicking 'Next', analysis and wavelet scale extraction starts, upon which, after a short while, the second interactive noise reduction stage interface is presented.

Noise reduction and grain shaping is performed in three stages.

The first-pass algorithm is an enhanced wavelet denoiser, meaning that it is able to attenuate features based on their size. Noise grain caused by shot noise (aka Poisson noise) - the bulk of the noise astrophotographers deal with - exists on all size levels, becoming less noticeable as the size increases. Therefore, much like the Sharp module, a number of scale sizes ('Scale n' parameters) are available to tweak, allowing the denoiser to be more or less aggressive when removing features deemed noise grain at different sizes. Tweaks to these scale parameters are generally not necessary, but may be desirable if - for whatever reason - noise is not uniform and is more prevalent in a particular scale.

Noise grain caused by shot noise (aka Poisson noise) - the bulk of the noise astrophotographers deal with - exists on all size levels, becoming less noticeable as the size increases.

Different to basic wavelet denoising implementations, the algorithm is driven by the per-pixel signal (and its noise component) evolution statistics collected during the preceding image processing. E.g. rather than using a single global setting for all pixels in the image, StarTools' implementation uses a different setting (yet centred around a user-specified global setting) for every pixel in the image.

The general strength of the noise reduction by the wavelet denoiser, is governed by the 'Brightness Detail Loss' and 'Color Detail Loss' for luminance (detail) and chrominance (colour) respectively.

The noise reduction solution in StarTools is based wholly around energy removal - that is attenuation of the signal and its noise components in different bands in the frequency domain - and avoids any operations that may add energy. It does not enhance edges, does not manipulate gradients, and does not attempt to reconstruct detail. These important attributes make its use generally permissible for academic and scientific purposes; it should never suggest details or features that were never recorded in the first place.

Any removed energy, is collected per pixel and re-distributed across the image in a second pass, giving the user intuitive control, via the 'Grain Dispersion' parameter, over a hard upper size limit beyond which grain is no longer smoothed out.

The 'Grain Equalization' parameter lets the user reintroduce removed noise grain in a modified, uniform way, that is; appearing of equal magnitude across the image (rather than being highly dependent per-pixel signal strength, stretches and local enhancements as seen in the input image).

The 'Grain Equalization' feature an acknowledgement of the "two schools" of noise reduction prevalent in astrophotography; there are those who like smooth images with little to no noise grain visible, and there are those who find a tightly controlled, uniform measure of noise grain desirable for the purpose of creating visual interest and general aesthetics (much like noise grain is added for a "filmic" look in CGI). The noise signature of the deliberately left-in noise, is precisely shaped to be aesthetically pleasing for precisely this purpose. 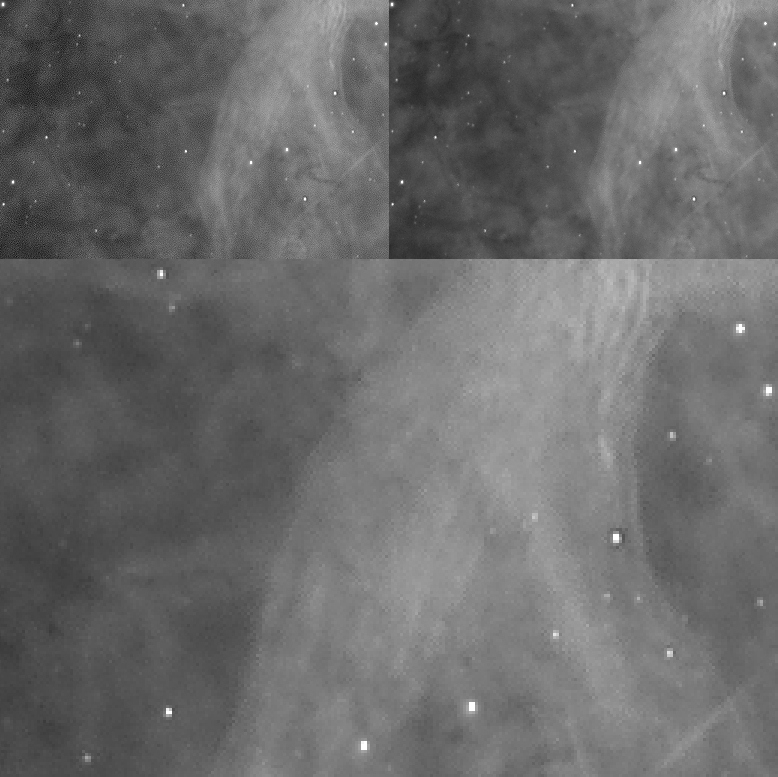 Top left: noisy image at 100% zoom. Top right: denoised image at 100%, with grain shaped into quantization error diffusion to retain more detail, even though the image appears to be denoised. Bottom: a 300% zoom of the top right image, revealing the shaped grain.

Given StarTools' general design goal of exploiting psychovisual limitations of the human visual system, there are some important things to take note of when evaluating the result.

Specifically, the module exploits "useful" noise grain (by modelling it as quantization error in the signal) to retain and convey more detail in areas that are too "busy" for the human visual system to notice, without the result appearing noisier. The actual "useful" noise grain, much like dithering, however may be visible when zoomed in at scales beyond 100%.

The value of the module's ability to shape noise grain in this way, becomes particularly apparent when combining this ability with the output of StarTools' deconvolution module. The latter module can be "overdriven" to trade increased detail for increased (though perceptually equalised) fine grain noise "artifacts". The magnitude of the noise grain is subsequently recovered, modeled and shaped for use as quantization error diffusion in the final denoised image.

Of course, if so desired, using more aggressive parameter settings will progressively eliminate such quantization error diffusion, and yield a smooth image.

StarTools / Denoise is also available as