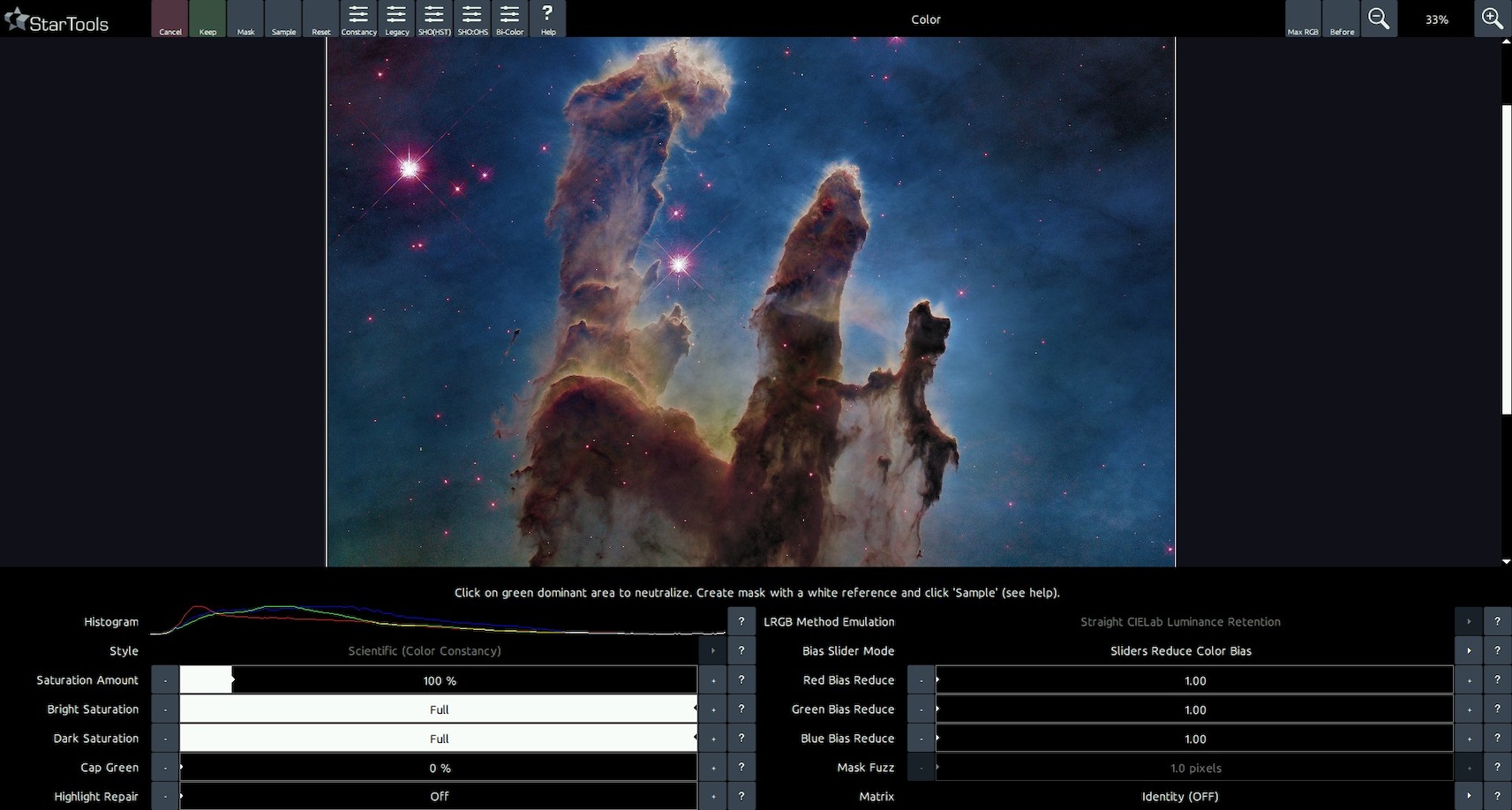 StarTools is powerful, yet very easy to use; no windows, no clutter, no process containers.

A new way of astronomical image and signal processing

StarTools is a powerful new type of image processing application for astrophotography that tracks noise propagation as you process.

StarTools extensive knowledge of the past, present and - sometimes - future of your signal, allows you to do things users of other, traditional software can only dream of. These things include mathematically correct deconvolution of heavily processed data, mathematically correct colour calibration of stretched data, and objectively the best noise reduction routine on the market that seems to "just know" exactly where noise grain (and even walking noise!) in your final image is located.

As opposed to other software, StarTools uses new GPU-accelerated brute force and data mining techniques, so your precious signal is preserved as much as possible till the very end. StarTools makes use of the advances in CPU & GPU power, RAM and storage space, replacing old algorithms with new, more powerful ones.

StarTools is the best-kept secret amongst signal processing purists; those who fundamentally understand how StarTools achieves such superior signal fidelity.

StarTools is the best-kept secret amongst signal processing purists; those who fundamentally understand how StarTools achieves such superior signal fidelity. Yet, you don't need a mathematics or physics degree to understand the underpinnings of its unique processing engine; see the Tracking section to learn more.

All modules in StarTools are designed around robust data analysis and algorithmic reconstruction principles. The data should speak for themselves and manual touch-ups or subjective gradient model construction is avoided as much as possible.

We are incredibly pleased StarTools superior processing capabilities haven't gone unnoticed, now being the new tool of choice for a rapidly growing group of enthusiasts, observatories, schools and institutions that numbers in the many thousands.

The software is "user friendly by mathematical nature". To be able to function, the engine needs to be able to make mathematical sense of your signal flow from start to finish. That's why it is simply unable to perform "nonsensical" or destructive operations. This is great if you are a beginner, and it saves you from bad habits or sub-optimal decisions. It's not so much because we put "guard rails" in; it is just that the mathematics would break down otherwise.

All modules are designed to address one particular step, issue or problem definitively. Because endless tweaking leads to poor results, StarTools' mantra is "do it right the first time". StarTools eschews the idea of having multiple modules or scripts that do the same thing poorly, or at the wrong time. Instead it implements a limited set of powerful modules that are tasked with one thing. As a result, workflows are short, targeted and replicable.

As affordable as it is powerful

StarTools aims to be as affordable as it is powerful. The StarTools project is about enabling astrophotography for as many people as possible, no matter how limited or advanced their means and equipment. As such, we aim to provide the most advanced image processing algorithms of any software at a just a fraction of the price of less capable traditional software.

StarTools / About is also available as