FilmDev stretches your linear image with a bold non-linear stretch that emulates the response of old school photographic film, including all its perks and shortcomings.

The FilmDev module was created from the ground up as a robust equivalent to the classic Digital Development algorithm that attempts to emulate classic film response when first developing a raw stacked image.

The FilmDev module effectively functions as a classic digital dark room where your prized raw signal is developed and readied for further processing.

The module can also be used as swiss pocket knife for gamma correction, normalisation and channel luminance contribution remixing. 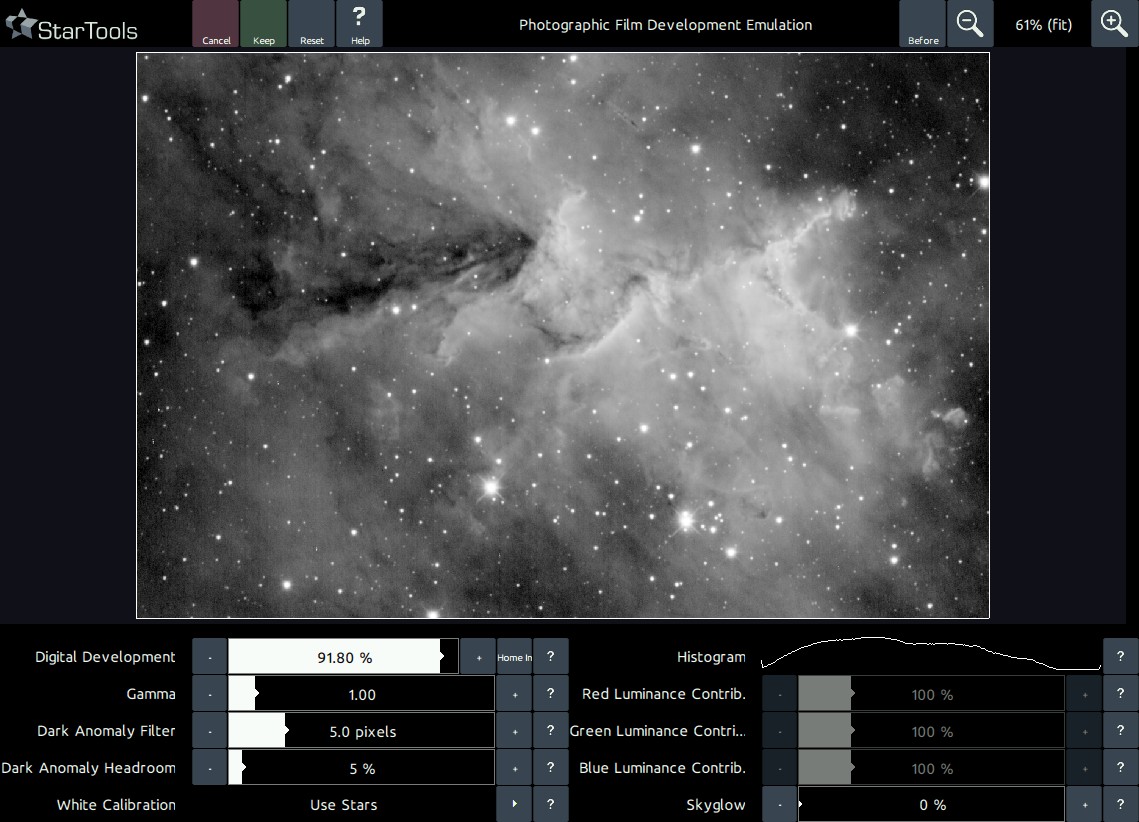 First off, please note that this module emulates many aspects of photographic film, including its shortcomings. These shortcomings include photographic film's tendency to "bloat" stellar profiles. If your goal is to achieve a non-linear stretch that shows as much detail as possible, the far more advanced AutoDev will always do an objectively better job for that purpose. Please note that the edge-enhancing qualities of photographic film are not emulated by this module, as this step is best done through other means.

Enhancements over the classic Digital Development algorithm (Okano, 1997), are the introduction of an additional gamma correction component, the removal of the edge enhancement component, and the introduction of automated black and white point detection. The latter ensures your signal never clips, while making histogram checking a thing of the past.

Central to the module, is the 'Digital Development' parameter, which controls the strength of the development and resulting stretch.

Central to the module, is the 'Digital Development' parameter, which controls the strength of the development and resulting stretch. A semi-automated 'homing in feature' attempts to find the optimal settings that bring out as much detail as possible, while still adhering to the Digital Development curve. This feature can be accessed by clicking on the 'Home In' button until the image does not change much further. A simple 'Gamma' correction can also be applied.

A 'Dark Anomaly Filter' helps the automatic black point detector ignore any dead pixels. Any dead or darker-than-real-background pixels are caught by the filter, they are re-allocated a reduced amount of dynamic range as set by the 'Dark Anomaly Headroom' parameter.

Automatic white point detection ('White Calibration') uses any over-exposing stars oir other highlights in your image, however it can also be switched to use the 'Dark Anomaly Filter' setting to filter out any bright anomalies (e.g. hot pixels) that are not stars or real highlights.

Finally, a luminance mixer allows for re-mixing of the contribution of each color channel to brightness.

Traditionally, image processing software for astrohptography has struggled with this, resorting to kludges like "special" stretching functions (e.g. ArcSinH) or Color enhancement extensions to the DDP algorithm (Okano, 1997) that only attempt to minimize the problem, while still introducing color shifts

While other software continues to struggle with color retention, StarTools Tracking feature allows the Color module to go back in time and completely reconstruct the RGB ratios as recorded, regardless of how the image was stretched.

Because of this, the digital development color treatment extensions as proposed by Okano (1997) has not been incorporated in the FilmDev module. The two aspects - colour and luminance - of your image are neatly separated thanks to StarTools' signal evolution Tracking engine.

StarTools / FilmDev is also available as