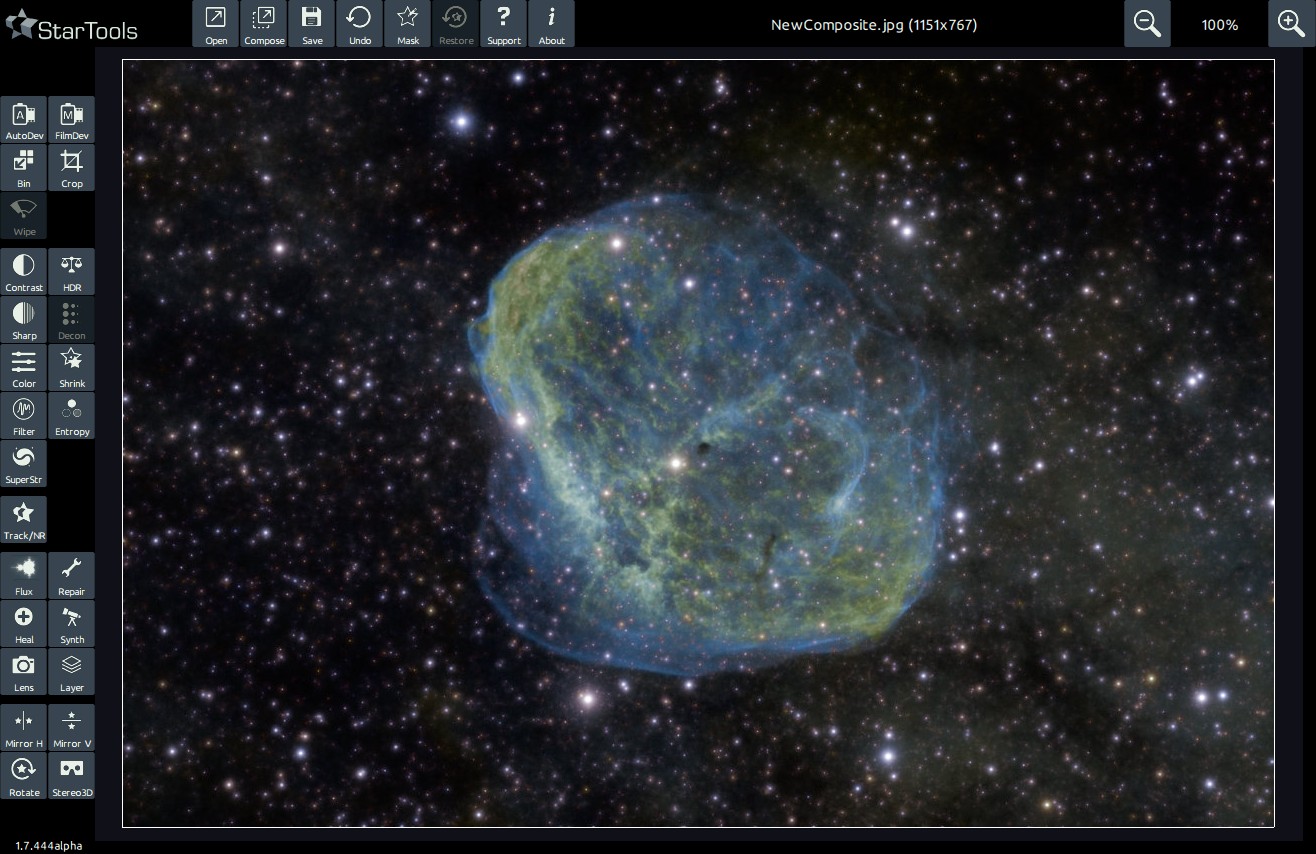 Example of the main interface

Navigation within StarTools generally takes place between the main screen and the different modules. StarTools' navigation was written to provide a fast, predictable and consistent work flow.

There are no windows that overlap, obscure or clutter the screen. Where possible, feedback and responsiveness will be immediate. Many modules in StarTools offer on-the-spot background processing, yielding quick final results for evaluation and further tweaking.

In some modules a preview area can be specified in order to get a better idea of how settings would modify the image in a particular area, saving the user from waiting for the whole image to be re-calculated.

Navigation within StarTools generally takes place between the main screen and the different modules.

In both the main screen and the different modules, a toolbar is found at the very top, with buttons that perform functionality that is specific to the active module. In case of the main screen, this toolbar contains buttons for opening an image, saving an image, undoing/redoing the last operation, invoking the mask editor, switching Tracking mode on/off, restoring the image to a particular state, and opening an 'about' dialog.

The icons in the top two panels roughly follow a recommended workflow.

Exclusive to the main screen, the buttons that activate the different modules, reside on the left hand side of the main screen. Note that the modules will only successfully activate once an image has been loaded, with the exception of the 'Compose' module. Note also that some module may remain unavailable, depending on whether Tracking mode is engaged.

Helpfully, the buttons are roughly arranged in a recommended workflow. Obviously not all modules need to be visited and workflow deviations may be needed, recommended or suit your personal taste better.

Consistent throughout StarTools, a set of zoom control buttons are found in the top right corner, along with a zoom percentage indicator.

Panning controls ('scrollbar style') are found below and to the right of the image, as appropriate, depending on whether the image at its current zoom level fits in the application window. 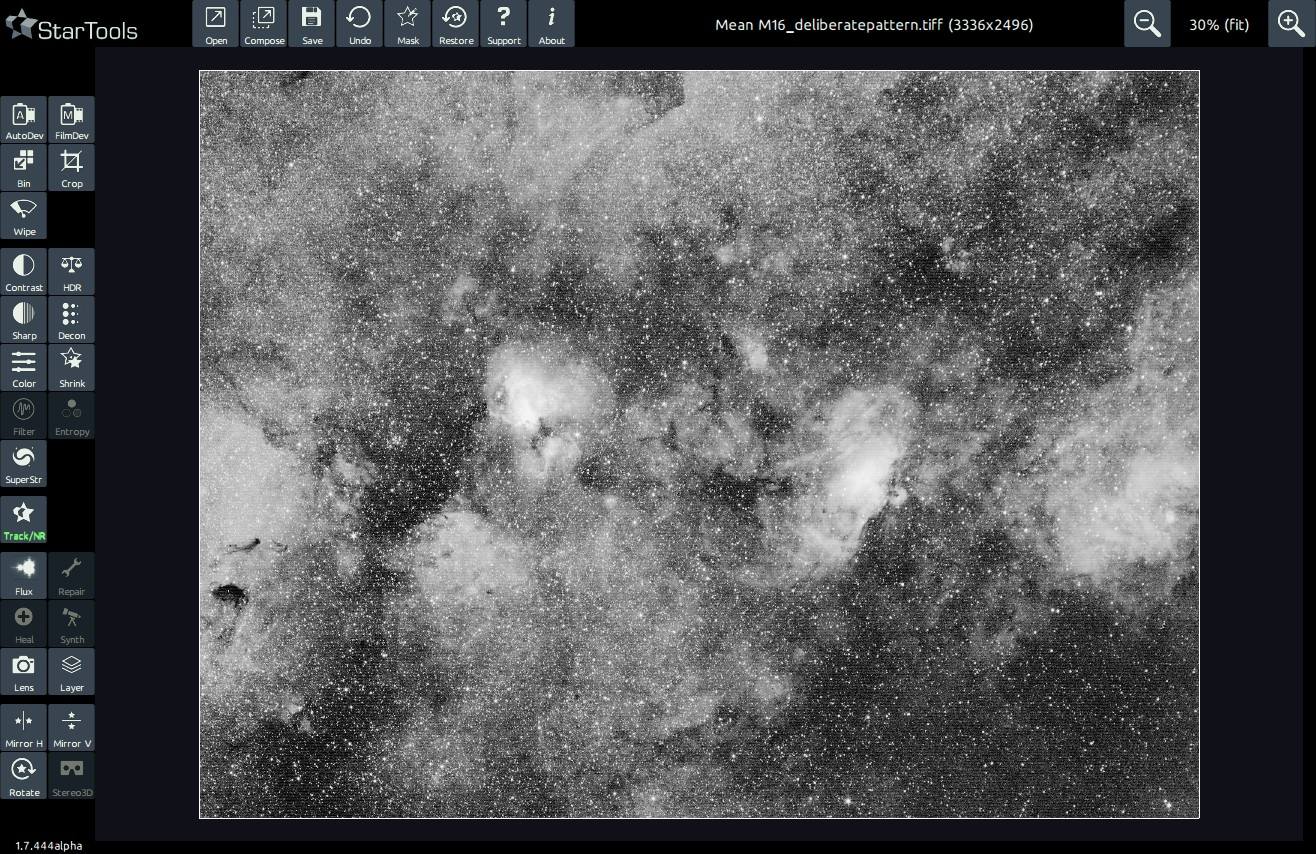 Even the way StarTools displays and scales images, has been created specifically for astrophotography.

StarTools implements a custom scaling algorithm in its user interface, which makes sure that perceived noise levels stay constant, no matter the zoom level. This way, nasty noise surprises when viewing the image at 100% are avoided.

StarTools implements a custom scaling algorithm in its user interface, which makes sure that perceived noise levels stay constant, no matter the zoom level.

Even more clever, StarTools scaling algorithm can highlight latent and faint patterns (often indicating stacking problems or acquisition errors) by intentionally causing an aliasing pattern at different zoom levels in the presence of such patterns. 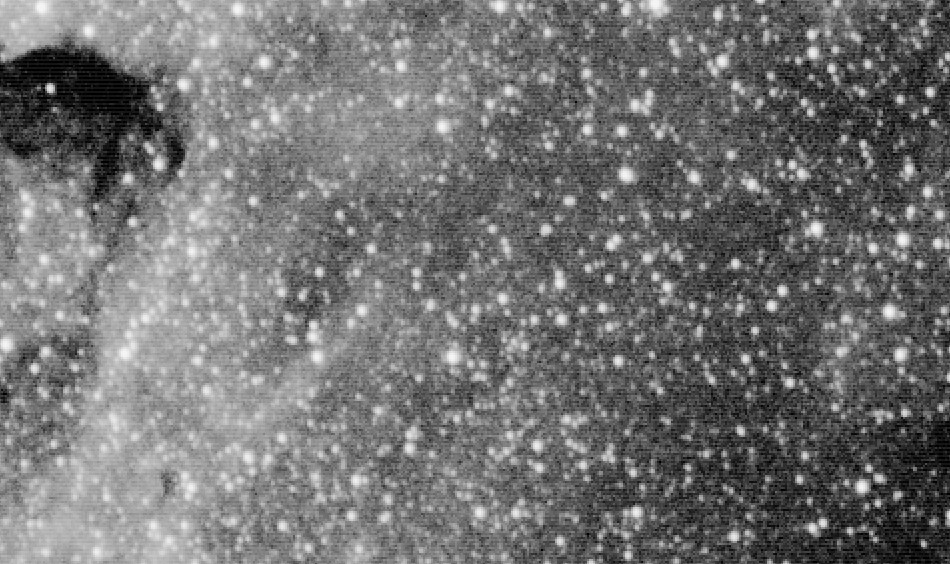 At 200% zoom level a barely distinguishable horizontal pattern can indeed be seen.

An example of a levelsetter control in StarTools

The parameters in the different modules are typically controlled by one of two types of controls­;

An example of a selector control in StarTools. Clicking on its center will reaveal all options as a pop-over menu.

Setting the value represented in a level setter control is accomplished by clicking on the '+' and '-' buttons to increment or decrement the value respectively. Alternatively you can click anywhere in the area between the '-" and '+' button to set a value quickly.

Preset buttons can be distinguished by their icons; they bear the icon of the module you launched (in this case, the Wipe module)..

Most modules come with presets that quickly dial in useful parameter settings.

These presets give you good starting points for specific situations, and for basing your own tweaks on.

Preset buttons can be distinguished by their icons; they bear the icon of the module you launched.

As of 1.7, enhanced mouse controls are implemented;

As of version 1.5, StarTools implements some hotkeys for common functions;

StarTools can also be entirely operated by touchscreen with all controls appropriately sized for finger-touch operation.

StarTools / Interface is also available as