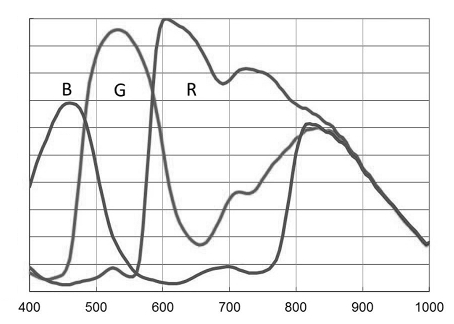 This example spectral response graph of a ZWO ASI290MC camera shows a marked "bump" in the green and blue response beyond the red visual spectrum cut-off (approximately 700nm).

However, imaging with these instruments without a suitable IR/UV filter (also known as a "luminance filter") in place, will cause these extra-visual spectrum wavelengths to accumulate in the visual spectrum channels. This can significantly impact the "correct" (in terms of visual spectrum) colouring of your image. Just as a light pollution filter makes it fundamentally impossible to white-balance back the missing signal, so too does imaging with extended spectrum response make it impossible to white-balance the superfluous signal away.

Hallmarks of datasets that have been acquired with such instruments, without a suitable IR/UV filter in place, is a distinct yellow cast that is hard (impossible) to get rid of, due to a strong green response coming back in combined with extended red channel tail.

The solution is to image with a suitable IR/UV filter in place that cuts-off the extended spectrum response before those channels increase in sensitivity again. The needed IR/UV filter will vary per OSC. Consult the respective manufacturers' spectral graphs to find the correct match for your OSC.